Between 1975 and 1979, nearly 2 million Cambodians (and some foreigners) were murdered in the genocide perpetrated by Pol Pot’s Khmer Rouge regime. The basic idea was an ethnic cleansing in pursuit of a pure race and utopian society. The result was pretty much as far from utopia as you can possibly get.

People were forced from their homes overnight. They were sent to labor camps and prisons. They were tortured and they were murdered. Whole families were wiped out, from infants to the elderly (the Khmer Rouge wanted to minimize the risk of family members later seeking retribution for their relatives’ deaths).

It can be difficult to comprehend what life must have been like for those living in Cambodia during these darkest of days. To get some idea, you can visit the Tuol Sleng Genocide Museum and the Killing Fields in Phnom Penh. Both include very well-produced audio guides to explain, as much as it can be explained, what happened.

Tuol Sleng, also known as S-21, was a previously a school that was taken over by the Khmer Rouge and turned into a torture prison. Approximately 14,000 people were held here during Pol Pot’s reign; only seven survived.

The Khmer Rouge kept detailed records of each prisoner, including photographs and details about punishments each endured (as well as the ‘crimes’ they confessed to during this abuse). Many of these photographs are on display at the museum.

In one building, the Khmer Rouge cut doors into the walls of the classrooms, creating a long corridor that could be patrolled by a single guard. Within each room, crude cells were built from bricks, giving each prisoner only a few feet of space.

Another building houses the interrogation rooms, which include the beds prisoners were shackled to as they were tortured.

Following the fall of Pol Pot’s regime in 1979, S-21 was discovered by two photojournalists who followed the smell of rotting flesh to find the last 12 prisoners who were killed as the prison guards escaped. They were still chained to the interrogation beds, having been bludgeoned and stabbed to death so as not to leave behind any witnesses.

Although there are killing fields all over Cambodia, the most famous one is near Phnom Penh. This was the last stop for prisoners held at S-21, who arrived simply to be killed.

Only a few buildings ever existed here, including a detention center where prisoners could be held overnight if there wasn’t enough time to kill them all immediately upon arrival, an executioner’s office, and a weapons storage area. None of these buildings remain, having been dismantled by villagers in the years after the genocide.

The site is now primarily a path and boardwalk through the area with the important areas denoted with brief signs. By far the most comprehensive explanation comes from the audio guide. In the center of the field stands a Memorial Stupa, housing the skeletal remains of thousands of victims.

Perhaps the most difficult part of the entire tour is the killing tree, against which infants were bashed to death (or close enough) before being tossed into a mass grave with their mothers. 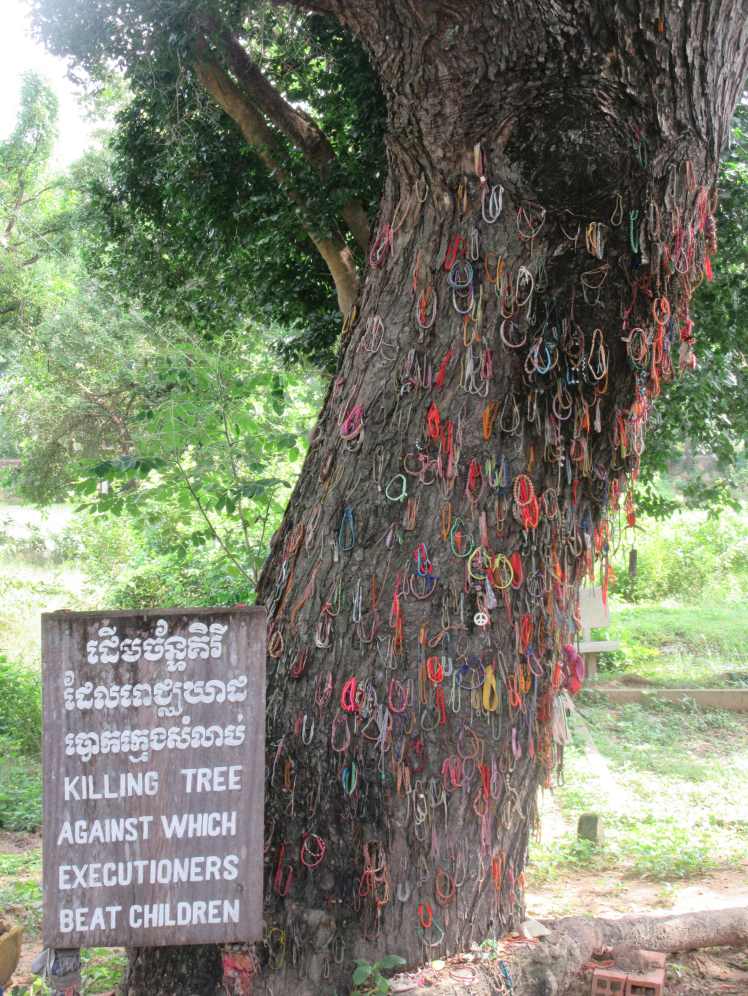 Nearby is another tree. This one held loudspeakers that blasted music meant to drown out the sounds of the people being bludgeoned and hacked to death. The Khmer Rouge didn’t want to tip off the neighbors as to what was really going on in those fields. This was truly a horror movie being played out in real life, soundtrack and all.

It takes at least a half day to see both sites (assuming you listen to the whole audio guide), but could take longer depending on how much you want to explore on your own or visit the traveling exhibits (when I was there, one of these exhibits was about the women and men who were forced into marriage during the Khmer Rouge era and how they feel about it now). You aren’t going to leave in a particularly cheery mood, but you will learn something.

Location: Both sites are outside of Phnom Penh (or at least the part of town I was in) and about 30-40 minutes apart. You will book your driver for the full tour, so he will wait for you as you visit each location, rather than requiring you to find a new driver for each step.

How to Get There: All hostels/hotels can arrange a tuk-tuk driver for you, or you could arrange one yourself.

Cost: My hostel advertised $18 tuk-tuks for the day, which could be split by up to 4 people. Each location has a $6 entry fee (including $3 for the audio guide, which I highly recommend).

Reminder: Hold onto your bags and phones at all times. Thieves will snatch them right out of our your hand or out of your lap. Even when you’re in a tuk-tuk, they will drive up beside you, grab your stuff, and disappear. I can say from experience that this is definitely not cool.

One thought on “Cambodia’s Killing Fields”